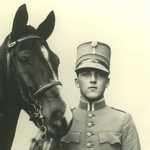 I'm not Colorblind, I know the world is just Black and White...
Omhoog

Just for those who care to know why Bowie wrote this.
Bowie used to frequent a cafe bar atop a high rise building in West Berlin that overlooked the Berlin wall. He noticed every day at a set time, a man would come and stand on the viewing tower (a flight of wooden stairs to a public platform that overlooked the wall, across no mans land, to the wall on the East side). He would stand there motionless and gaze across to the East, where a woman would come at the same time, and stand atop the tower, staring back at the man. They would make no sign, no waving, nothing but looking. Then they would go, returning again the next day.
Bowie reasoned these were two lovers, separated by the closing of the iron curtain, whose love endured, despite the deadening oppression of their separation. One day at a time, their love continued to silently shine across the gulf that separated them in sight of one another. They were indeed hero's, just for one day. Every day.