custom schreef:Thank you bruno that correct I have a picture of it.

@Dima,This lamp has a notebook with pencil
made for WH officers ''Sendler'' made in Germany 1936 D.R.P Dima >Thanks for sharing this information

You are fantastic Dima! Thank you for uploading such a valueable documentation

Dima >Thanks for sharing this information

the patent date is 1913 but nobody knows how long it takes to launch a new product.

lets see a picture but I think this PERTRIX AERODYN-ELEMENT battery is from the 50th years.
Elke oorlog is er een teveel !
Omhoog

Schijnwerper schreef:Yes well i tried to explain, is something confused, by used an old name by the Zeiler turnlight after the WW2 War in Germany.
Yes indeed Max Zeiler came with the Zeiler Turnlight idea by in 1920's.
Turnlight is an Registering patent by Max Zeiler him self 1922.
Others factories used with permission by Max Zeiler Patent also the Turnlight construction idea.
Is nothing more than a 4,5 volt's battery with a paper cardboard box an it.

But why used Max Zeiler an old name Turnlight again, after The War from a new produced flashlight in Bakelit, nobody knows so far.

Dear produced as we know so far' 2 type's of flashlight's afther the War in Bakelit.
From 1947's The New Turnlight's. And the old type Zeiler Nr 4350 D.R.P. type flashlight, but without the type nummering 4350 D.R.P.
In 3 new fresh colours Red Green and Black and dark brown .

Well, it not so simple as you described above. Zeiler Turnlight, or sometimes written as Turnlicht was even more, than a 4,5V battery!
"Turnlicht- Handlampe ohne Hülse, ohne Schalter" - as demontrates the old advertisement from 1930's as follows:

So it was a very sophisticated 2 in 1 built in electric torch, easy to use and replace the bulb. No container for the battery, no switch were needed.
Those "Turnlicht-Handlampe" can be seen between other Zeiler batteries at Kleinschimdt&Co. (Stettin) catalogue from 1933, I have attached its' link. 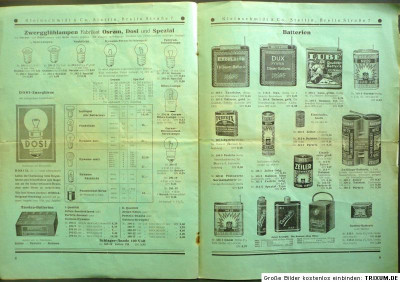 Yes well ok haha of course dear have on bulb on it, you can the bulb replace up side down then i gives light.
It was a ferry simple design but effectif, cheap to buy on and easy to produce. Ferry successful for Max Zeiler!

It started all over with this flaslight for Zeiler, then i was leather begin 30's started with the production bakelit Flaslight's.

I have a picture maybe the first mid production of the successful Zeiler Turnlicht.

Thank you very much guys. Dima and Schijnwerper you are great.
Here is my Zeiler Turnlight bakelite torch, based on the original patent.
Do not now so far, why they changed the name from "Turnlicht" into the English "Turnlight".
Probably the made an export business to USA, since they have a patent in the USA from the
year of 1925. 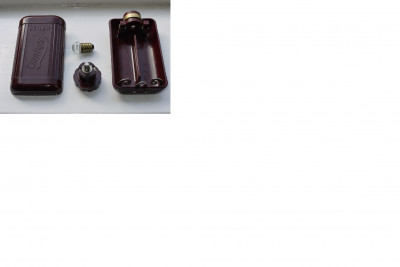 I recently buy this lamp sold as German WWII (the left one). It seems to be this one: Can you help me to know the model ? Have you got pics of a complete lamp like that ?
Some parts are missing here...